It Was Only Five Red Balloons but it Was Enough… 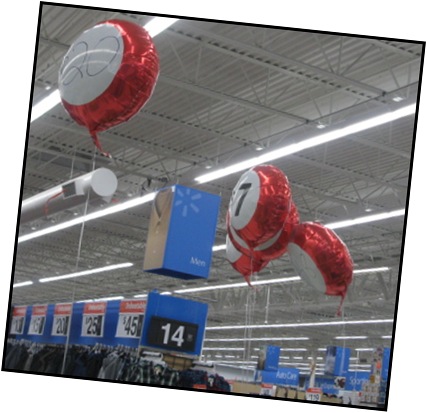 I stood in the line to check out at Wal Mart Saturday after wandering aimlessly through the Christmas section for way too long. It’s been hard to get in the Christmas spirit this year, but I’m trying…

In my cart I ended up with two large containers of red and silver ornaments and ribbon for a new tree topper bow. I thought that maybe this year I wouldn’t dive into our “traditional” homemade decorations and just do something totally different.

As I stood there, though, waiting for my turn to pay, I had this sense that I needed to put the ornaments back and be okay with what we already had. I looked around for a place to set them, but I always feel rude leaving things in the check-out shelves and was debating whether I should go all the way back to the Christmas section or simply muster up the ability to ask the cashier to put them back. I’m always afraid that if I open my mouth to ask a question that in any way is related to Nick’s story that I’ll have a meltdown in public, so I was trying to avoid that.

About that time, I saw five red balloons coming my way. Now, I’ve been to Wal Mart tons of times and I’ve never seen their red balloons moving along towards me, but they were! As I watched them near me, it was an employee pushing a cart with balloons tied all around it filled with things she was taking back to different sections of the store. WOW! I felt like Nick (He loved the song “99 Red Balloons”) was saying “Mom, put those ornaments back and have the kind of tree our family loves…..it’s okay.” So I looked at the employee and just said, “Can I please put these in your cart?” She said, “No problem.” And that was the end of that.

I’m so glad I carry my camera everywhere I go!

I pulled it out and took a picture as she was walking away from me. In my heart, I was remembering the 99 red balloons floating away at Nick’s funeral, and I had such a feeling of peace come over me. (Nikki, you were in the aisle next to me and I wanted to tell you what had happened but after visiting with you in the Christmas section and knowing we were both having an emotional day……I decided to wait. That’s why I asked for your email address. :))

When I got home and looked at the picture, I couldn’t believe there was a 7 and then a 14 so clearly visible! Fourteen is how old Nick should be now, and seven is how old he was when this journey began!

Thank you, Lord, for allowing Nick to remind me that He is GREAT!

I can just see him grinning about red Wal Mart balloons making my day!

I wanted to share a video from the end of Nick’s funeral service.We had a dear friend, Chad Jones, set up sound equipment outside the church so that the kids who had come forward and gotten red balloons at the end of Nick’s service during the song, “Big, Big House,” could release them as a group outside before going to the cemetery. Nick had so many friends, and we wanted the kids to leave the church feeling “happy” not “sad.” We wanted the kids to look back on Nick’s service as a true celebration of all that Nick was. This song was one Nick sang along with so many times on his IPod, and it was so beautiful to watch the balloons go up! Later we heard that all of the balloons floated east except for one that went west right towards our house! Several people witnessed it who were not together!

May your day be filled with messages from God….even if they are in the form of red balloons at Wal Mart! 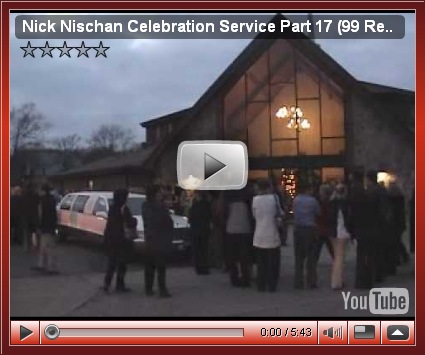