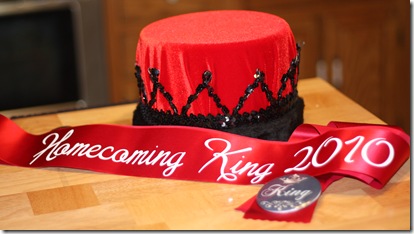 Our oldest son Erich was on the homecoming court at Kentucky Christian University this past Friday night and was crowned “king” during the ceremony between games.

I was moved to tears as they called his name.

I really don’t know why.

I think it was a combination of so many things. 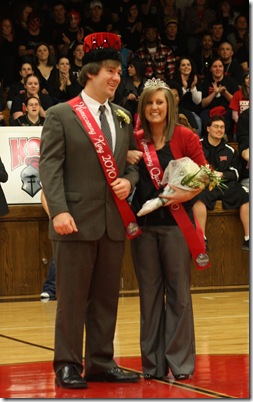 The reality that our little boy is now a senior in college.

The thought that Erich is loved by his classmates.

The memories of so many past homecomings where Erich simply ran the halls playing with his buddies and now HE was standing in the middle of the court for this special honor.

And then the gnawing reality that Nick wasn’t with us to share this moment. 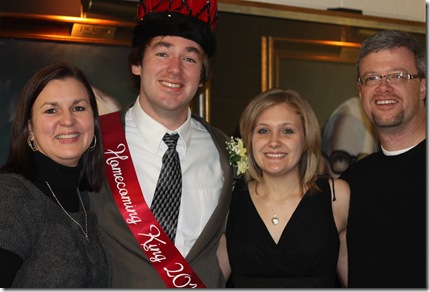 I’m thankful Mallory was here to share this special night and that she made it safely back to Nashville yesterday. 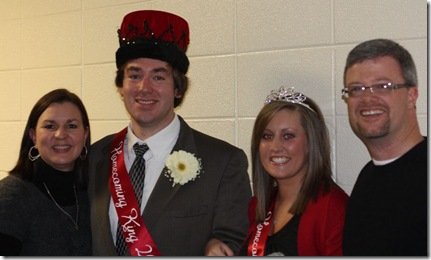 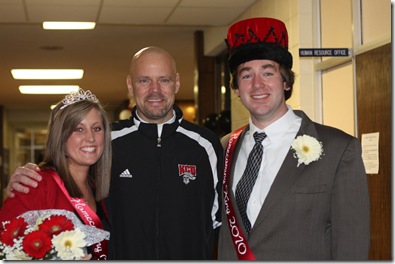 I’m thankful that Jeff (President Metcalf) was in the lobby so we could snap this picture! 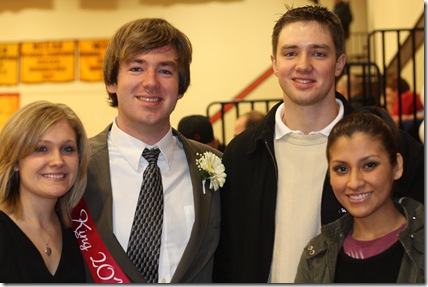 I’m thankful that Evan and Maria both got to be there. 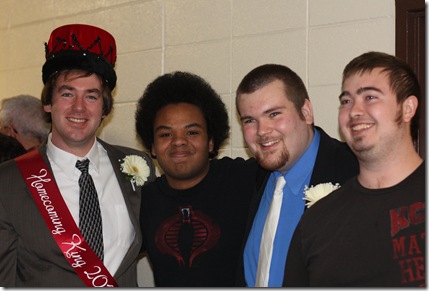 I’m thankful that Erich has made great friends like Justin, Shawn, and Matt. 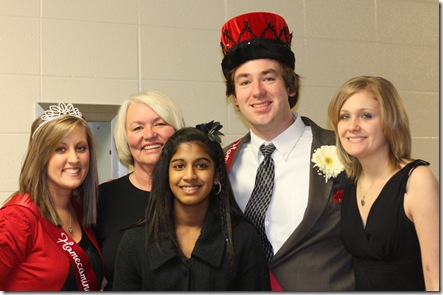 I’m thankful that Mom and Olivia were both there too! 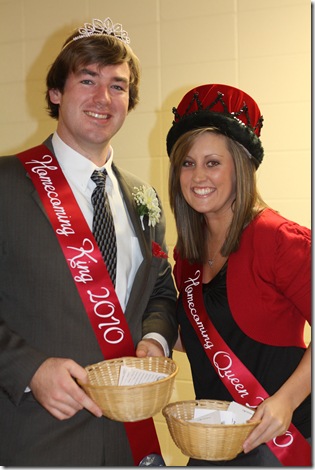 I’m thankful that even in the midst of this honor, Erich and Jena could both have a fun sense of humor as they returned to the gym to draw scholarship names out of their baskets. (Notice their crowns)

I especially loved that the names Erich drew were “Nicholas and Nicole.”  (How special was that?!?!?)  I think Nick was saying “hi!!!”  One friend whispered in my ear, “Nick is a child of the King and now he is the brother of a king.”  I thought that was so sweet. 🙂

Most of all, I’m thankful that little things like the words Homecoming King remind me that the King of Kings is truly going to bring us to our knees weeping one day as we bow before Him thanking Him for all He has done for us.

12Fight the good fight of the faith. Take hold of the eternal life to which you were called when you made your good confession in the presence of many witnesses. 13In the sight of God, who gives life to everything, and of Christ Jesus, who while testifying before Pontius Pilate made the good confession, I charge you 14to keep this command without spot or blame until the appearing of our Lord Jesus Christ, 15which God will bring about in his own time-God, the blessed and only Ruler, the King of kings and Lord of lords, 16who alone is immortal and who lives in unapproachable light, whom no one has seen or can see. To him be honor and might forever. Amen.

So for today, I pray that you will feel the presence of Your King as you venture into yet another week of life.

The mother of a king, but most importantly, a daughter of THE KING,